What is a flick mixer tap?

A flick mixer tap is a plumbing device that is used for residential and commercial sinks, in the kitchen, laundry and maybe sometimes even in the bathroom. It has been replaced in modern homes by many different models of taps because they are less functional and look slightly dated.

They were commonly used in households, running water through a flick of the wrist, hence the name flick mixer tap. You can sustain a flick for as long as you want, which means that you also have complete control over how much water will be flowed and what temperature it will flow at.

Flick mixer taps are no longer preferred because they allow less space to operate within. The rise of the flick mixer usually is about 5cm whereas these days people prefer more space and are looking at gooseneck mixers that are generally 15cm or more above the benchtop.

Why would you choose a flick mixer over a goose neck mixer?

BUDGET BUDGET BUDGET! Flick mixer taps are mass produced with very little effort now because they have been around in the market for so long. These days you could go to Bunnings or a specialised plumbing store like Tradelink and find a flick mixer for as little as $32!

Second reason is height, sometimes people are worried about how high their mixers are, possibly because they don't want to see it above a window or bench. Modern mixers are generally a lot higher than a flick mixer, so if you're limited by height then maybe this is a better option.

The flick mixer still gives you the ability to flick from side to side, without any obstructions. This is a very large advantage that many people find useful when they are using it on a daily basis. As Gooseneck mixers have a more sensitive waterflow and take a while to get used to.

Flick mixer taps comes as standard in a lot of older houses, however there is no real reason why someone shouldn't be changing over to a modern mixer.

Should I upgrade my flick mixer taps?

The answer would almost always be YES! It's the easiest way to give your kitchen, laundry or bathroom a modern touch by changing the flick mixer tap to higher end designs such as goosenecks, the installation is generally easy and if you've got a few of them lined up a registered plumber would be able to easily swap them over all at once a for a reasonable packaged price.

What is a popular colour for tapware?

Tapware traditionally was chrome plated brass, these days there are a variety of mixers to choose from such as

Should I upgrade my mixer myself?

No, you should not upgrade your mixer yourself, you should always use a registered plumber. The reason is to keep your warranty of your plumbing products, but if you've decided you're not concerned bout the product warranty and you'd prefer to DIY then feel free to because most of the time it is an easy swap.

Just be aware though you will void your warranty, as well as you run the risk of not doing it correctly, and if something bad or major was to happen your home insurances would generally not cover you if you don't have a registered plumber to do your plumbing work.

What else should I look out for?

Check out our modern range of Kitchen mixer taps here. 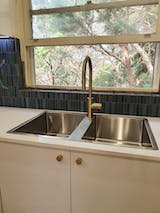 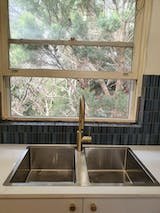