What is a Swivel Spout on a tap?

It means that the spout part of the kitchen sink mixer, where the water comes out of, can swivel on its base, this is so that you can turn the tap so that the water can be delivered to different areas or sides of your Kitchen Sink, for more kitchen sinks online have a look at our selection. it is extremely important in the kitchen that the tap that you purchase has swivel base or spout otherwise it'll be very impractical. Fixed spouts are usually only found in small bathroom basin mixers or in the laundry.

Pull out or Pull Down Sink Mixers explained.

A pull out spray kitchen mixer tap, like the Buildmat Coco Pull Out Spray Sink Mixer Tap. Is considered the most functional and practical solution in the kitchen, it makes completing chores in the kitchen quicker and easier and offers so many benefits, so if you don't have one in your kitchen make sure you put it on your wishlist, let's talk about some of the advantages:

Hosing down Vegetables
The dispensers that usually come with the pull out taps have a spray that is quite large and being able to pull it out and control the direction, hosing down vegetables becomes a lot easier.

Washing pots or trays out of your kitchen appliances
This makes washing large pots so much easier, instead of spinning and manoeuvring your pot within your stainless steel kitchen sink trying to get all the grease out you can just pull out your mixer almost like a handshower and spray your pot down. Saves a massive amount of time.

Gooseneck sink mixers are kitchen sink taps that have a high curved outlet and a square Shape or U shape mixer is similar to the gooseneck but with more square shape to it. The reason why these are so popular in the kitchen is that the height makes a bit easier to clean larger items like a pot, not to mention that they're quite trendy in the kitchen, they're a bit sleeker than most pull out taps.

What's the difference between a faucet, tap and mixer?

If you're confused about the tapware terminology don't be surprised. When we're talking about interior design or kitchens and bathrooms, the words faucet, tap and mixer can be used interchangeably, but we'll give you a bit of background.

The definition of a faucet and tap is 'a device that controls the flow of a liquid or gas from a pipe or container'. The difference is faucet is American English and tap is British English, in Australia, we tend to see that both words are used interchangeably.

Whereas a mixer tap or faucet is where the hot and cold water supplies have a joint outlet or spout and are controlled separately, they can either be a single lever or double lever.

What's the difference between a single lever or double lever?

The lever or handle on tap is used to balance flow and water temperature. In the past most kitchen taps or basin taps and showers were double levers or double handles , the reason for that is because mixers were expensive but now with the assistance of demand and technology they are produced at a reasonable price and have made single handled taps cheaper.

In a single lever mixer tap, both the hot water and cold water inlets would go to the same spot and the mixer inside the tap will allow you to control the temperature and pressure out of the same tap.

Why do people prefer single lever or single handle taps?

there are a few reasons that people are opting for single lever rather than double levers more in recent years.

The only downside for a single handle faucet is that they tend to leak faster than double handles. In the last few years we have seen a resurgence of the double handles with a sleeker design than in the past.

You would have noticed the rising trend of coloured taps such as matte black, copper, gun metal and rose gold. The coloured taps are taking over showrooms all over Australia and it's not just limited to taps, they're used in bathroom accessories such as towel rails, toilet roll holders, toilet brush, lever handles and shower heads.

The dangers of using a coloured item is that it can scratch and start to look worn out very quickly.

5 years ago the technology used for colouring kitchen and bathroom accessories had been mostly powder coating and electroplating and what was found was that it was easily scratched and after a few years the wear and tear would be visible.

But modern technology brings us what we call PVD or Physical Vapor Deposition which is the name assigned to the range of vacuum coating techniques used to apply coloured finishes on metal. You will see that most brands like Nero, Castano, Buildmat, Blanco, Abey , Franke are using these technologies on their higher-end products.

Other Design factors to consider

Other design factors to consider outside of just colour and shape, there's always things that you'll forget to check like the size of your freestanding baths, the shape of your toilet suites cisterns, if your toilet has a bidet.  There's so many designs and themes out there it's always good to make sure you do your research, even look outside of Australia for design inspiration, and remember every item, colour and shape counts to your home's atmosphere.

we hope you enjoyed reading our FAQ and if you have any other questions please feel free to drop us a message in the comments or email. If you ever want to know our shipping fees you can provide us with a postcode and we'll try and get you an estimate, or feel free to browse our Kitchen Mixer Taps or Bathroom Mixers.

Great price and fantastic service. I will shop here in future.

I’ve just done a small makeover in my kitchen and replaced my outdated round sinks with this stunning new beauty! Really solid construction. Quick online ordering process, and delivery from NSW to Cairns in 2 weeks despite all the freight and logistics issues. 5 stars to this great Aussie company. 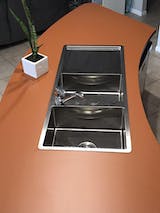 Received very quickly but only just installed. So far looks great! Perfect depth and size. Purchased the sink drainer basket too which looks ok but I didn’t realise it didn’t fit the base of the sink, even though it has rubber feet for this purpose, it sits over the edge of the sink. Overall though very happy with my purchase.

Purchased a Brushed Gunmetal Willow 600x450 Medium Single Bowl Sink and a Mira Brushed Gunmetal Pull Out Mixer for our new custom built drink bar. purchased it on line without doing the " look & feel thing" so I was a little bit dubious about the quality and service. I had no reason at all to worry as the sink and mixer was delivered to our doorstep within 4 days of payment.(600 + Ks away), in perfect condition. The overall quality of each item blew me away....far exceeded our expectations...perfection is an understatement...They match to the detail and are an absolute pleasure to use. 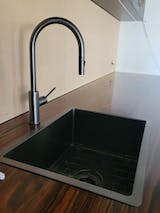