If you’re lucky enough to have stumbled upon Buildmat’s guide on How to Choose the Right Tap for Your Kitchen, hello and welcome!

Look, we get it. With hundreds of tap sets, individual tap handles and different spouts available, it can be tough knowing which tap is going to work best in your new kitchen, but also which will look best (looks matter, okay?)

If you’re wondering how to go about choosing the right tap for your kitchen, stop your internet search. We have everything you need to know contained in this article. We’re experts in all things sinks and taps, so this advice is based on our expert knowledge in the field.

Are you ready? No time for drips - let’s get to it.

There Two Types of Taps

The first thing to know is there are two types of taps:

Single taps contain a faucet and two water control handles – one for hot water, and one for cold, and they are on the left and right side of the faucet.

Mixer taps are the most convenient, and easier to install. These are the taps where you have one handle that controls both hot and cold water and are mixed together that comes out from one single spout.

Now we get into the types of mixer taps. There are four main mixer taps: Pull out kitchen taps have a spout on the tap that pulls out, which allows you to direct the water around the sink. Pull out taps are ideal for washing larger items like large pots, or fore reaching areas a normal faucet couldn’t reach. Dual spray mixer taps come with a two-spray functionality which lets you switch between a shower setting or an aerated stream. Shower setting is great for cleaning big items like pots or pans, while the aerated stream setting is ideal for washing vegetables and fruits or items that need less water flow force. Gooseneck sink mixers are kitchen sink taps that have a high curved outlet. They are popular options for kitchen sinks due to their height - making it easier to clean larger items like pots. They’re also contemporary and on-trend, and having a sleeker look than most pull out taps. A square mixer is similar to the gooseneck but with more square shape to it. Like a gooseneck mixer, they are popular options for kitchen sinks because they are tall and can perfectly fit a deep sink, making them the best choice for larger sinks and cleaning big items like pots and pans.

Looks matter when it comes to choosing the right tap for your kitchen, but so does shape, size and functionality.

To reduce splashback, always make sure you choose a spout that is in proportion to your sink. For example, if you have a deep sink, a gooseneck mixer is ideal because it’s tall.

Also, we’d recommend a pull-out tap with a retractable nozzle, because this easily allows you to direct water in whichever direction you want, which is very handy for cleaning. Some taps have a spray button allowing you to flip between jet spray for power washing dishes, or a gentle spray which is a good option for rinsing fruit and vegetables.

Why Your Kitchen Tap Matters

Why does the type of kitchen tap matter anyway? Well, the kitchen tap is one of the most often used fixtures in the house. It needs to be both functional (after all, we spend a lot of time in the kitchen washing up), and visually appealing - it can really bring together the whole look and feel of a kitchen.

Whether you’re updating several fixtures or building a new kitchen from the ground up, the tap is a crucial design element, and needs to be chosen in combination with your kitchen sink.

Your kitchen tap should be in a colour and shape that complements the look and feel you want your kitchen to have. For example, angular tapware has a contemporary and sleek look that sits great in square sinks. A gooseneck mixer with a round sink can be a lovely pairing for a more homely kitchen, while decorative taps can become a real focal point and standout feature in your kitchen.

Kitchen taps come in a variety of different colours and finishes - so whether you want your mixer to stand out or fade into the background, the choice is yours. A stainless-steel sink with a chrome tap is classic, while a tap that’s brushed brass can be a gorgeous focal point on an island bench.

No one wants to spend more time in the kitchen cleaning than necessary (unless you really love cleanin!), so maintenance should be a consideration in choosing the right tap for your kitchen. If you can’t stand the look of marks and fingerprints on your sink, a matte black is a great choice for you - whereas metallic tapware might see you scrubbing away in the kitchen for longer than you’d like.

What's the difference between a faucet, tap and mixer?

The difference between faucet and tap comes down to countries. The difference is faucet is American English and tap is British English. In Australia, we tend to see that both words are used interchangeably.

A mixer tap/mixer faucet is where the hot and cold water supplies have a joint outlet or spout and are controlled separately, they can either be a single lever or double lever.

What's the difference between a single lever or double lever?

The lever or handle on tap is used to balance flow and water temperature. In the past most kitchen taps were double levers or double handles. This is because in the past, mixers were expensive. These days, with the assistance of demand and technology they are produced at a reasonable price and have made single handled taps cheaper.

In a single lever mixer tap, both the hot water and cold water inlets would go to the same spot and the mixer inside the tap will allow you to control the temperature and pressure out of the same tap.

What is a Swivel Spout on a tap?

We have a huge collection of beautiful and functional kitchen taps - find your perfect fit today! Was not sure what size sink protector to get for a Buildmat sink my builder got for me and the team at Buildmat was so helpful and recommended the correct sizing. Shipping was swift and the protector fit like a glove. Super happy! Thank you team! 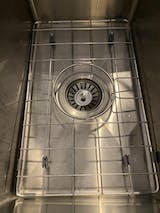 Very happy with our purchase, builder was very impressed with price and quality. Delivery was sooner than expected. Highly recommend this supplier 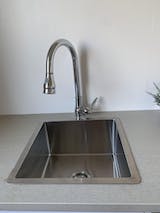