When choosing a kitchen sink or laundry sink for your home, you can't go past our range of single and double bowl options. You can buy our sinks online with complete peace of mind, confident in the knowledge that the contemporary style and first-class manufacturing of our stainless steel kitchen sink will stand the test of time. The Kitchen Sink is the most used fixture in your home so it is important that you choose a quality kitchen sink that suits your lifestyle. A quality stainless steel sink is designed to go through cooking and cleaning battles together with you in the kitchen, so make sure you choose a high-quality stainless steel sink to last.

Our sinks are high precision handmade stainless steel meaning that they're sturdy all around. Also, our sinks come equipped with the sink strainers (also known as wastebaskets), they are also watermarked meaning that they meet fit the plumbing standards in Australia.

Buildmat is the winner of the international Product Design Award in the 2020 Architecture Masterprize.

At Buildmat we are constantly updating and improving our product range and designs and it has shown this year by winning a product design award in the kitchen category of a global competition.

Steel thickness plays an important part to the quality, durability and sound absorption of the sink.

The thicker the steel used to make the sink it means you get more sink. The reason why it’s important is because it becomes a sturdier and more solid sink, you’ll notice it when you start putting pots and pans down.

What is a taphole sink?

A sink with a taphole is where the tap would not go onto the benchtop but instead will go directly onto the sink. Generally there would be a tap landing and a predrilled hole for the mixer, whether it's a kitchen mixer or a laundry mixer.

Why choose a sink with a taphole

The reason why most people choose a sink with a tap landing or a taphole already existing in the sink is because their cabinet makers have suggested, mostly this would happen because there has been a laminate or timber benchtop chosen. These types of benchtops are susceptible to warping or becoming damaged when exposed to water. Since in Australia all the laminate benchtop providers such as Laminex, Polytec, Nikpol generally have in their fine print that the the benchtops warranty may be void if a kitchen sink or laundry sink with out a tap landing has been installed. This is because back in the day the way the sinks were shaped the taps would always have been installed into the sink rather than into the benchtop. There were different reasons for this, but the industry has changed a lot.

These days most modern and stylish sinks come with no tap hole and that's because both stainless steel sinks and laminate products have come a long way in the last decade, we'll explain why both of those have shaped the reason why it's so hard to find a sink with a taphole or sink with tap landing these days.

What topmount sink type should I get?

if you're going for a topmount sink then you can choose any of our Buildmat Ktichen Sink ranges, whether you get a tap hole or not is more dependant on the requirements of your cabinet maker or builder. Both our sinks with taplanding and without tap landing would be suitable for topmount or inset sink styles. Our Buildmat sinks come with a higher 1.5mm thick steel specification without the heavy price tag.

These days most washing machine waste pipes would go through the cabinet and connect to the waste that's under the sink which is more modern and hidden out of the way instead of having an exposed pipe that's an eye sore on top of your benchtop. We recommend you discuss this with both your plumber and your cabinet maker.

Older style or cheaper style laundry troughs might still have the waste inlet on the corner of the sink, we would recommend you avoid these style of sinks if you're going for a modern laundry or sink.

Why can't we have modern looking sinks with tapholes?

The reason is because most of the sinks with tap holes in the Australian market are pressed sinks, which means they are punched into shape by machine and have a lot of excess steel around the edges because they cannot make the corners tight enough.

This is why hand made sinks are so popular because they have a tighter R10 radius and way less excess steel around the sink. The downside to that is because it's so efficient with the space there isn't anywhere to put the mixer, now this is done on purpose because it means the sink mixer or sink tap would go on the benchtop.

Can sinks with tapholes be undermount?

Sinks designed to be undermounted shouldn't have a tap hole, as it would be useless, if you've decided that you're going for an undermount sink then we suggest that you look at our clean look undermount sink designs without tap holes.

What's the most Modern Double bowl sinks with a taphole?

the most modern double bowl sink is our carefully designed Jack 820x500 double bowl sink with tap hole, we have made it so that it maximises the space of the double bowl area while making the centre bridge fit the tap. This allows us to create a sink that's modern and doesn't have too much excess steel that takes away from the beautiful benchtop, whether it's stone wood or laminate.

Why do Single Bowl Sinks with tap holes remind me of cheap a laundry?

the reason is because traditionally what was put into a laundry is a super thin laundry tub with steel that can come as thin as 0.6mm which is pressed into shape with a flick mixer tap on the side of it. I'm sure you can imagine it and remember how fragile and tinny the sink looked. These days most people care a lot more about the design of their laundry room which means they are looking at everything from the type of basket waste, drainer, tapware and strainers.

Do we need a tap landing sink if we're going for a wall mixer?

Definitely not, if you're going for a wall mixer or wall spout combination then you definitely don't need a tap landing as there wouldn't be a tap to go on the benchtop or onto the sink. Maybe check out our single bowl laundry tubs, you would have more luck finding something there.

We design and manufacture our kitchen sinks and offer free shipping Australia wide.

The inset sink style (also known as overmount sinks or known as topmount sinks) are the most popular, we have designed our sinks to have an easy to install clip that holds the sink down to the benchtop whether you've decided to use a stone benchtop, laminate benchtop or timber benchtop you want to make sure you use our easy to use pull-down clips. Both our stainless steel single bowl inset sink and double inset sinks are available.

Our sinks are also designed to be an undermount sink, either undermount single bowl or undermount double bowl this is a more costly exercise and we always recommend that you plan your sink a lot earlier than usual because it is better to provide the sink to the cabinet maker so that there are no mistakes when doing the sink cut out. Make sure if you're designing your kitchen around the benchtop that you look for an undermount sink without a taphole because it is more elegant and having the tap sit on the bench makes for a better feel.

Another style that people like to use is the flush mount style, but make sure you have a conversation with your stonemason before deciding because it's very hard to get right and might end up as a costly activity, but if you're able to pull it off nothing can beat the style. Either single bowl sinks or double bowl sinks will work for a flushmount, but we'd avoid putting in a drainboard for a flushmount style.

We have multiple styles of single bowl sinks, double bowl sinks, and drainer sinks with a drainboard if you'd like to read more about sink configurations you can visit our article: which kitchen sink style is right for you. If you're going to be a lot of cooking a preparation then consider a double bowl sink.

If you're after a nice sturdy laundry tub that you're getting a benchtop for, make sure you don't get stuck with a low-quality tub, generally when people think laundry tubs they are flimsy low quality and out in the corner. Modern homes are now being redesigned with a laundry that's nice enough to show your guests, the kitchen laundry tub is the best option as they're made strong enough for the wear and tear of kitchen use but situated pleasantly in the laundry, most people will choose a single sink instead of a double sink for the laundry, but it's really up to you. it's actually one of the best-kept building secrets: using a single bowl kitchen sink in the Laundry. If you want to read more on buying a laundry tub visit our article: Laundry tub buying guide

Also consider choosing a variety of kitchen sink accessories that are custom made for our sinks, whether it's a chopping board, dish rack, colander or roll mat we've designed it perfectly for our sink and it's free delivery when you buy the sink because we just throw them inside the box for you!

We have a large range of styles of sink bowls and kitchen taps and kitchen mixers to go with the theme and style of kitchen, whether it's a contemporary or classic, minimalistic or Grande design we'll have one available to suit your style.

Our online showroom has our entire range for you to view, if you find it hard to navigate then please feel free to give us a call on 1300123122 and we'll be able to talk you through the styles available.

Whether you're after a matte black tapware, gunmetal soap dispensers, chrome toilet roll holders, bath spouts or bathroom accessories, we're happy to have a chat. Alternatively, you can visit our Kitchen Sink FAQ.

We purchased a Felda champagne basin. It is absolutely stunning we loved it when we seen it online but now we have it in our hands it looks even more beautiful we can’t wait to renovate our bathroom and put this in there as the feature. Extremely fast shipping, no hassles and great price 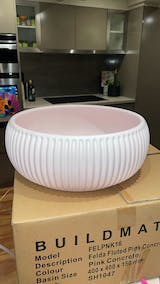 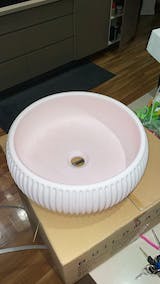 Absolutely love this sink protector grid, it is preventing scratches and also doubles up as a drying rack. Excellent quality a very fair price 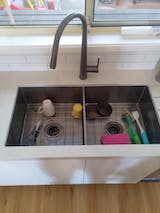 Bought this sink to replace the crappy sink provided by builder. This sink is a well made item and is way more solid than the thin, easily dented, probably imported sink fitted originally. Great sink, came well packed and delivered to my door.

Really appreciated the time spentbn your showroom. I knew the Clara was the desired kitchen sink and will return to shop for accessories once our new kitchen benches, and Clara are installed.